On the road in Istanbul

We departed the rush and bustle of NYC and traveled to Turkey via Zurich, a small peaceful interlude between two huge cities. The airport was set in the midst of canola fields and countryside, and had the quiet high tech discretion of a Swiss watch. Sometime in the following four hours we passed through the looking glass, and when we flew in over Istanbul I could hardly believe my eyes. The city poured out from the ocean in the colours of an ancient ruin, but there were skyscrapers as well, spread out over the undulating hills, not as a collective city cluster but intermittent between houses and mosques and water. Hundreds of giant tankers loomed through the pink afternoon smog – it was extraordinary, as though we were arriving in the port of another time. I was quite sure the ethereal manner of our arrival would see an abrupt change when we landed, but the potential chaos implied by the sheer size of everything just didn’t happen. People streamed through the airport halls, where we surfed through the visa and passport procedures and were in the arrival hall within moments. We slowed somewhat with the hundreds of names on flash cards all looking for a match, but having made one, we were seemlessly bundled into a van and whisked Schumacher-like into the city.

The city is divided by water, with the Bosphoros defining the Asian and European sides of the city and the Golden Horn separating Deyoglu ( where we would stay ) from Eminonu ( home of many famous landmarks like the Blue Mosque and the Grand Bazaar ). Of these three areas, Kadikoy on the Asian side was the highest on my list – I was coveting the whole experience of the ferry ride and the markets of this reputed food mecca of Istanbul. I was soon to find out that it was a food mecca within a food mecca, like a thin layer of finely sliced nuts in the middle of a perfectly sticky square of baclava…

Our home for a few days was the Hotel de Londres, a grand old hotel that had hosted many famous guests like Ernest Hemingway since opening in the early days of the Orient Express. For us it was the perfect choice, not just because of it’s over-lacquered and loved character, but because it’s lofty location gave us an excellent view of the mosqued skyline and put us in healthy walking distance of central Istanbul. The Spice Markets, the Blue Mosque and my map of the best kebab places  were all in reach and the hike back up the hill each evening would ensure unfettered culinary indulgence the following day. A real bonus was the jasmine filled rooftop garden, where, motivated by the early call to prayer, we saw our first sunrise in Turkey. The experience was so inspiring we had to repeat it, and the next morning raced to the old Galata Bridge at 4.30am to record the symphony of sound as all the mosques spluttered into life. While the faithful took their cue, in the opposite direction a light show illuminated a massive bridge stretching across the Bosphoros. It was as though we were given a personal insight into the extremes of the culture – traditional and modern at the same time, and with an open-mindedness to embrace both. Apart from the call, the city was complete and gloriously quiet. There was no-one around. This is a city that sleeps.

Beyoglu is a bustling area of shops and restaurants, with cobblestone streets winding around the Galata Tower and down to the water. It has tourists, but the narrow streets restrict the size of the hotels and the passage of cars. So it has real character and there are hidden treasures everywhere. One of these was a local eatery I discovered on the first morning. Many of the pastries in the window were new to me – snaking filo rolls, giant sized baked ‘pies’ and flakey squares of cheese and spinach. The baker chopped and plated various portions for me to try – along with the addictive Turkish tea, and by the end of 4 days, I had tried all that the window offered. He sensed my curiosity and with each request, added something new for me to try. His generosity was genuine and as I was soon to realize, very Turkish. There was no alterior motive, he didn’t want anything in return. We didn’t even speak the same language – well, maybe we did. But the generosity of the Turks is astounding, in all my years of traveling I’ve not seen anything like it anywhere.

From the top of the Galata Tower you can see for miles. In one direction you can see the clear divide between the European and the Asian sides of the city. In my ignorance, when I first saw a map of the city, I thought the Asian side was a reference to a Chinatown or an ethnically Asian area of the city. But of course the Bosphoros divides 2 continents – or should I say Istanbul unites them – and the energy this inspires is palpable. In the other direction you look towards the Spice Markets, the Grand Bazaar and the distinctive spires of the Blue Mosque. Of all these places I loved the spice markets the best – of course. The colors and smells were fabulous, and the buzzing of the local people around favorite shops and stalls led us to some impractical but essential purchases. Who needs to take a kilo of coffee back to NYC…? But it’s the best in Turkey! And that was just the beginning….

The ferry tide over to Kadikoy was more than just a regular commute. The salty breeze off the ocean, the view back to the Sultan’s palace, and the dolphins playing around the fishing boats in the harbor made for holiday magic. I knew from my well marked map where the markets were, which places were the ‘best’ and where we would probably have lunch. But there was no chance to proceed orderly, so we went from tasting turkish delight to olives to strawberries to cheese to baclava and tea, and then some more baclava. What a feast! In true Turkish fashion a cheeky fellow at the olive shop offered an array of olives for the tasting, demonstrating their sharpness by giving a little kick. There were huge pink ones, pipless green and juicy black, but the highest heels came for the long green ones – all of which he bagged for us. I had earlier bought some small green plums that I was curious to try – everyone seemed to be selling them, even though they looked hard and sour. In fact they were hard and sour, and thinking they must be an acquired taste, I offered the bag to our energetic friend. He laughed and gave a bigger kick as he said ‘no teeth!’ and the gaps told the story. I was stuck with the plums. ( I later found out they are meant to be eaten dipped in salt – which would no doubt inspire a kick of Olympic proportions. ) I had already bought turkish delight from the famous Haci Bekir on the other side, packed in gift boxes as an insurance that we would have some to depart with. I have never been a fan of the jelly option in the Cadbury box, but real turkish delight is firm and flavorsome. In Kadikoy we happened upon a sweet shop just as the need for tea became pressing. Bilgeoglu was a large and immaculate shop with every variation of shredded, layered, twisted and pistachio’d sweet honey pastry you could imagine. Empty boxes were packed to the ceiling in anticipation – it was clear this was a serious, and a very good, sweet shop. We started modestly with tea and a couple of layered squares, but then we were introduced to baclava with kaymac, an intense yogurt sour cream indulgence that would challenge the finest arteries. Whoa. Then came more pastries and entertaining stories about this family business supporting many wives and children. When we told the owner we slept on the European side of Istanbul but came to the Asian side to eat, he immediately produced a tray of delicious pistachio sweets for us to taste and we didn’t look back. We took home a feast of baclava, turkish delight and ground pistachio nuts – and a collection of photos of the three generations of men responsible for all the delightful damage this sweet business has done…. When you go to Istanbul, put Kadikoy and Bilgeoglu high on your list….

The search for a supremely good diner kebab took us trekking past the Blue Mosque and all around the Grand Bazaar. Both areas were packed with tourists – and restaurants. We were treated to tea and conversation as we stopped along the way, including a lesson on one towering diner grill that was constructed from 80 chickens and would be sold by the end of the day. The security guard at the Grand Bazaar also stopped us when he saw the cameras – but only because he had been involved with the making of the last james Bond film and ‘3-2-1 ACTION!’ had become a favorite english phrase. The diversions and the stories in Istanbul were the best part of the adventure. Carrying cameras and pausing to engage led to many interesting interactions from which the best shots – and stories come. Such was the case when we arrived at Seyhmus Kebab just around the corner from the famous old Turkish Baths. This place was highly recommended and when I indicated this by showing our host my google map with various destinations marked, he immediately showed it to the serious meet chopping man, who’s look transformed to joy. On my map I had marked this restaurant with an asterisk, and another with the words ‘Osman the butcher’. It turned out Osman the butcher was this man’s brother and he took much pride in their both receiving top honors.

Each day in Istanbul was rich to overflowing. I could never have imagined such open warmth and welcome as we received. Certainly the words of Ataturk and Anzac were in my head when I arrived, and the food markets were much of the allure of this exotic destination, but it was the people that made all the difference. Their attitude to us and to life has given me great pause, and I hope the feeling stays with me… 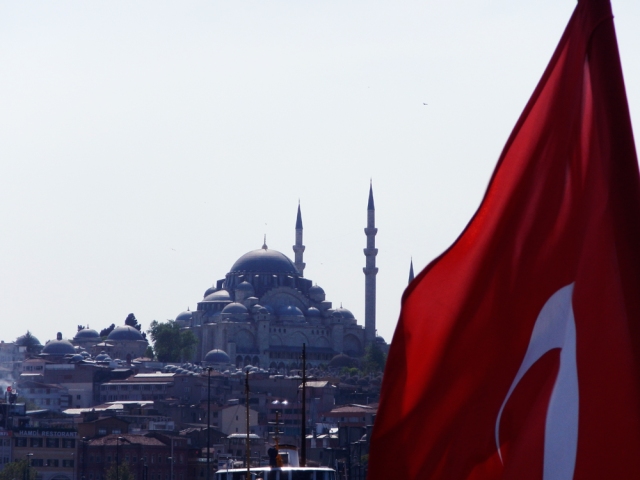 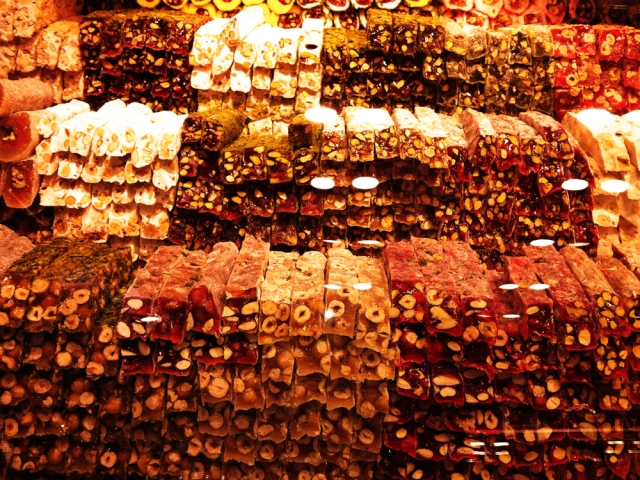 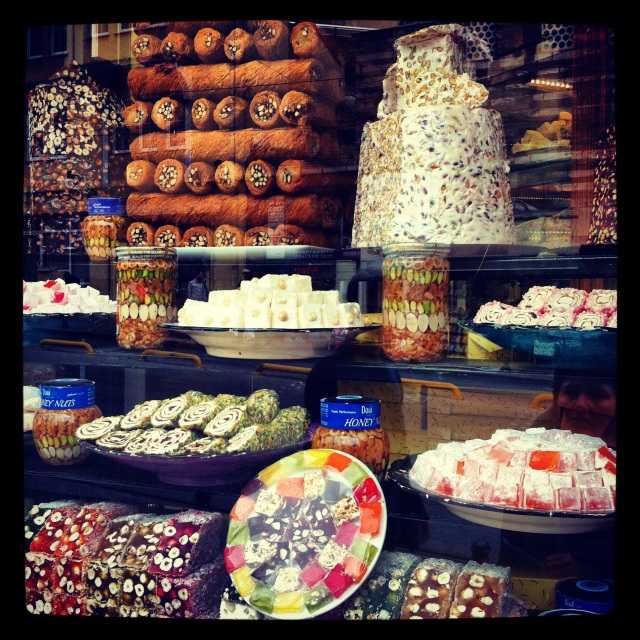 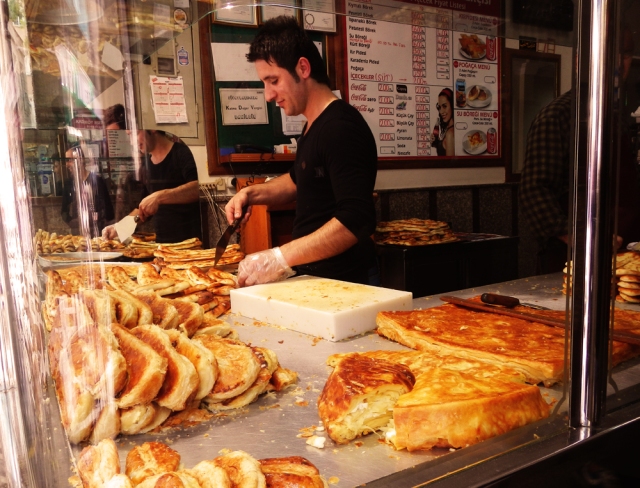 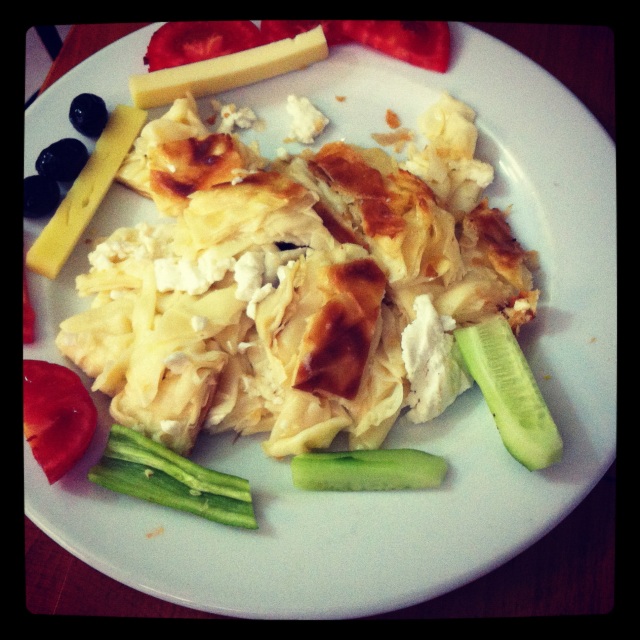 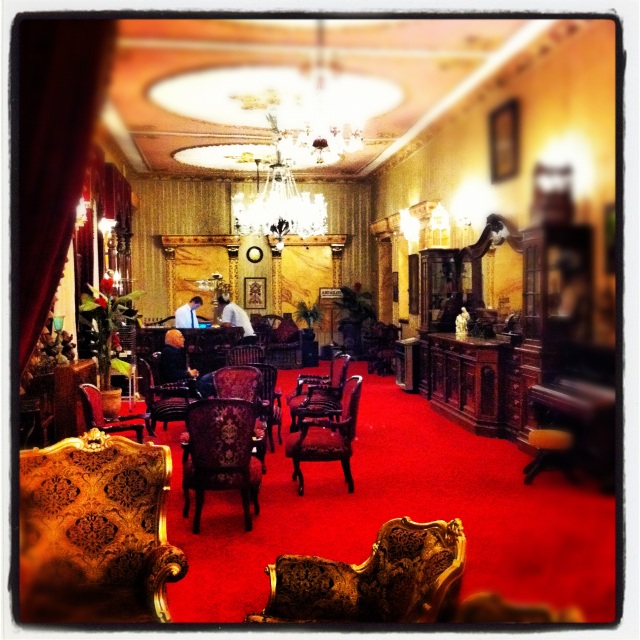 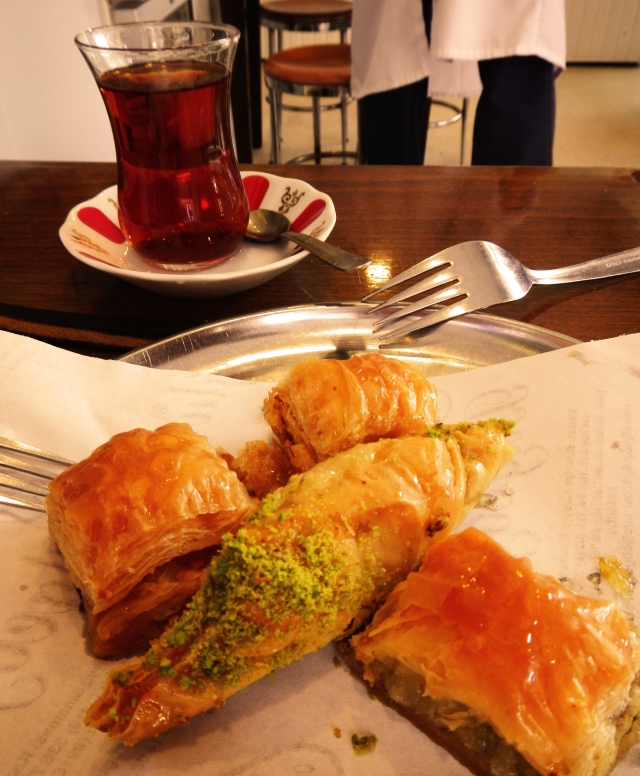 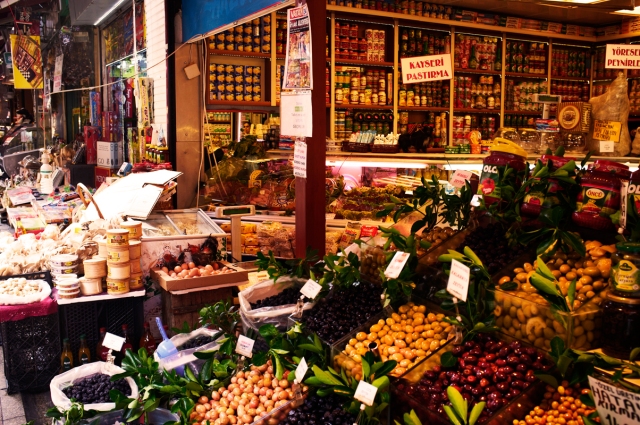 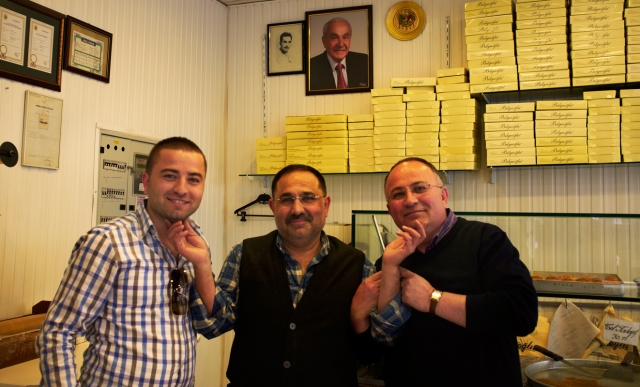 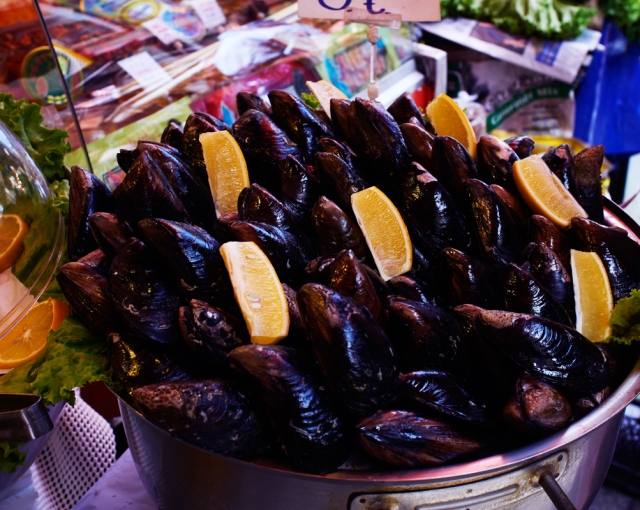 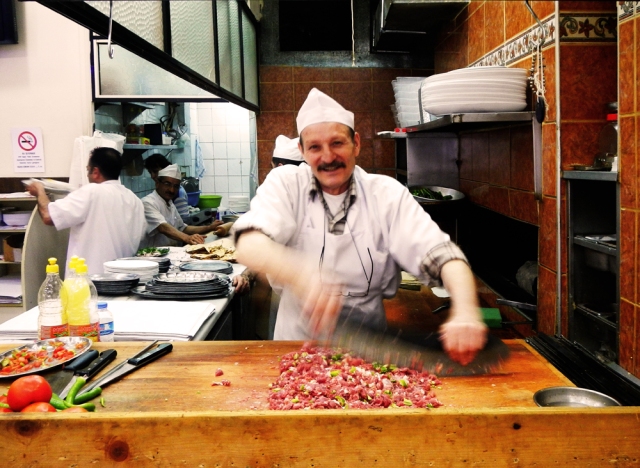 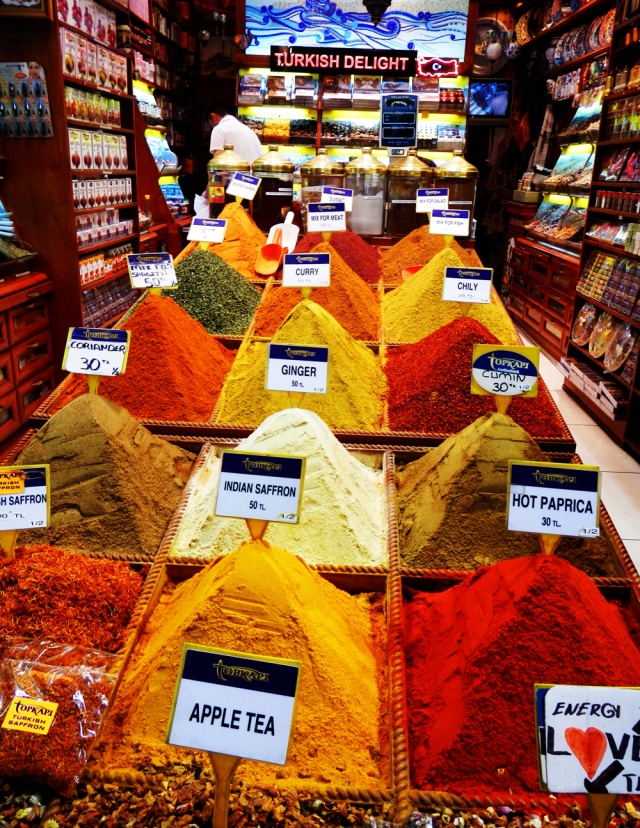 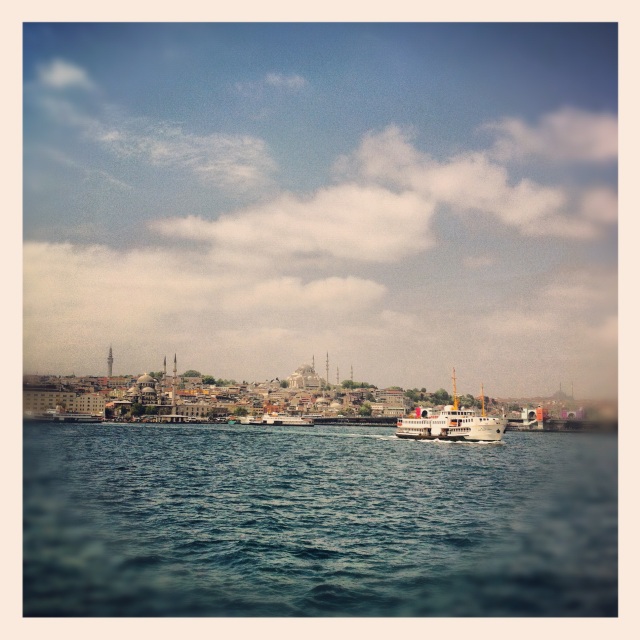 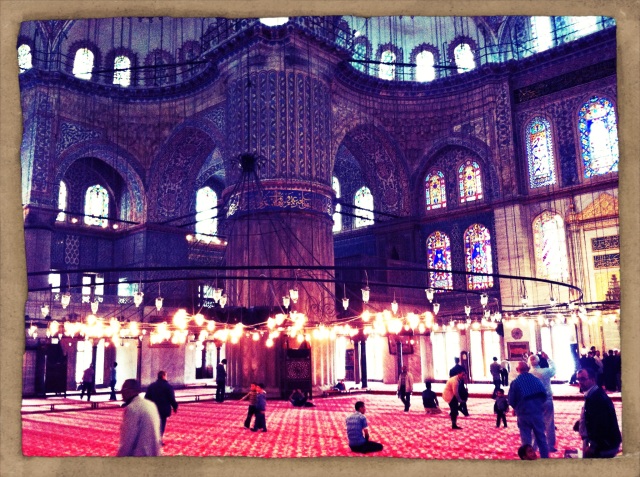 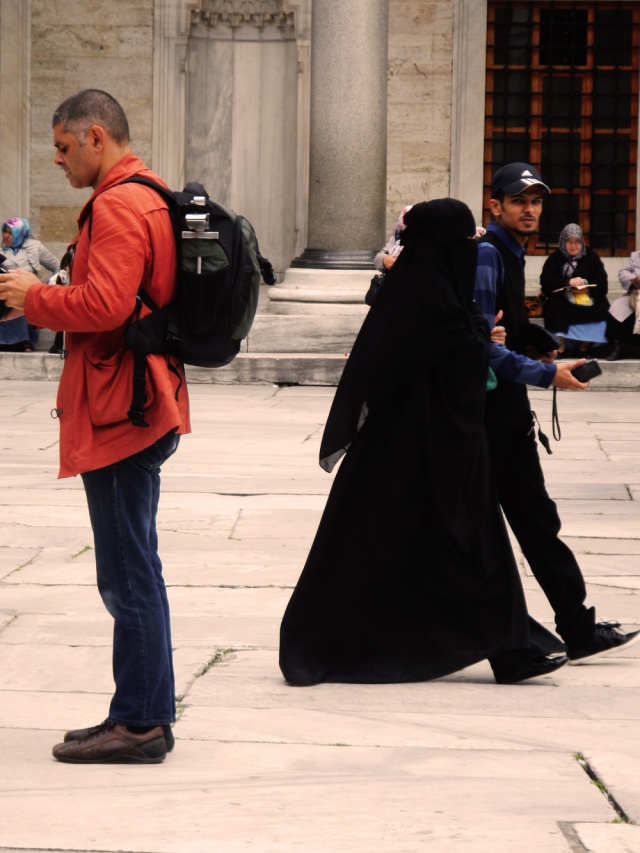 This entry was posted in travel and tagged Hotel de Londres, Istanbul, Turkey. Bookmark the permalink.

9 Responses to On the road in Istanbul