There is a swish new destination in NYC where you don’t want to get caught in your jeans. Unlike so many restaurants and bars in this city where anything goes, Red Rooster is a place you want to fluff your feathers. After hearing it mentioned enthusiastically by people and press and wondering how ‘southern’ food could win such a following, I had to swing uptown and find out. The Red Rooster is in the heart of Harlem on Lennox and 125th and is the work of Marcuss Samuelsson, a celebrity chef and all round nice guy. He was born in Ethiopia, adopted and raised in Sweden and now lives in Harlem where between television shows and charities, he hosts dinners for President Obama and listens to jazz.

At 6.30 on Saturday night the joint was jumping and there was a 40 minute wait for a table. Sean and I had just come from the Charlie Parker Jazz Festival so we were not dressed for dinner, but couldn’t pass on a cool drink from the bar. There was an interesting mixture of clientele including a group of well heeled women toasting a bride-to-be ( hen party at Red Rooster?! ), a couple of tourists with a map, families, and couples that looked like they travelled from the upper east side for the evening. The atmosphere was super friendly and inviting, so much so that it was fun just to loiter and take in the vibe.

Mr Samuelsson’s spirit of generosity was very evident. So was his background in the southern flavors of the menu. Fried chicken sat next to catfish and (Swedish ) meatballs, and the drinks list offered everything from pitcher’s of punch to french wine to cocktails like ‘Bourbon Negroni’ with roasted fig & pear-infused buffalo trace. I was tempted by the creole bitters in ‘The Spicy Lady’ but anticipating the ride home we settled for an apricot beer instead, which was refreshing and left us with enough puff to enjoy a moment in a street party on the way.

It’s hard to believe how many worlds there are in New York City. You ride uptown past Central Park and suddenly find yourself in a different culture. Sure, Red Rooster may just be another restaurant in a city of many, but it is the combination of parts that makes it so special – and I didn’t even mention the jazz club downstairs…. Days like Saturday remind me what an amazing opportunity I have to live here and be able to experience so much. I’m perpetually grateful. 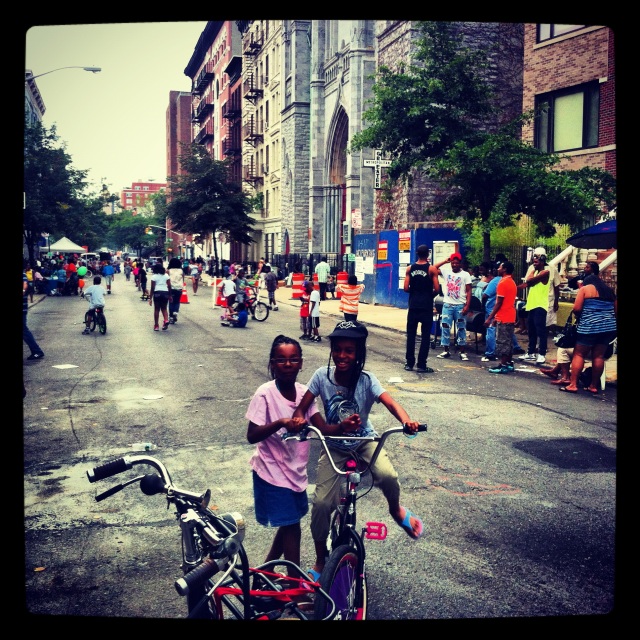 This entry was posted in Food, restaurants. Bookmark the permalink.