The Girl with a Pearl

Posted on January 13, 2014 by TheFitzyreport

The Frick was the New York hot spot on a very chilly Sunday morning, when hundreds of people lined up for a last chance to see the Dutch Masters before they returned to Holland. Queues shivered in either direction from the main entrance on East 70th Street as museum members lined to the east and the mob to the west. Spots were held as people dashed for coffee, and the conversation between strangers, and the camaraderie that ensued, confirms that NYC is still the best place in the world to wait in line. It took us nearly two hours to make the entrance, and worth every minute.

The Girl with a Pearl had a room to herself, appropriate for her iconic status and the crowds wanting to see her.  A respectful shuffling gradually enabled everyone to move to the front for a personal audience, where the beauty of the art – and her gaze – was mesmerizing. Vermeer is known for his light, and the fact that his muse is anonymous and the painter died in debt and unrecognized, somehow adds to the purity of the painting. In the next room Fabritius’ small painting of a gold finch was causing a similar rapture, where readers of the Donna Tartt best seller were contributing to record crowds at the Museum.

My curiosity about the mechanics of hanging a priceless work like the Girl with a Pearl was well met by one of the ‘ask me’ volunteers. She explained that the curators have a mini styrofoam mockup of the gallery with velcro positioning that allows them to ‘hang’ the painting in various places and make adjustments before actually bringing in the real art. Because the painting is fortified behind two layers of plexiglass in a boxed structure, it is incredibly heavy, and as such becomes the responsibility of a strong handyman to put the piece on the wall. What a claim to fame. The man with a masterpiece. The Girl with a Pearl. 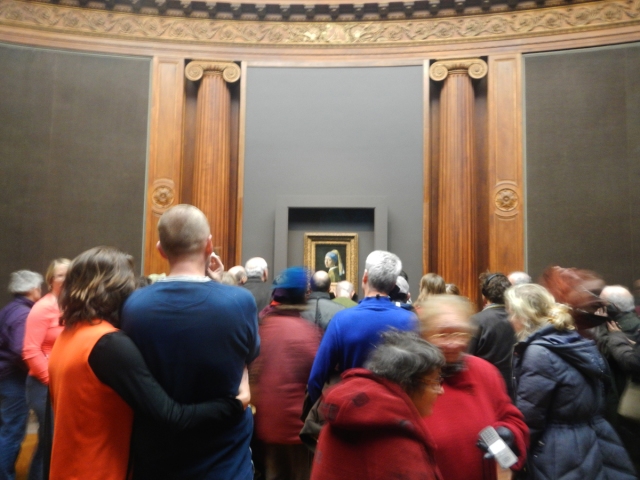 This entry was posted in art & inspiration, Uncategorized and tagged The Frick, The Girl with a Pearl. Bookmark the permalink.

8 Responses to The Girl with a Pearl