Inspired by my friend Amy’s forthcoming wedding celebration at the rooftop bar of  The Library Hotel, as well as the burst of fabulous Spring weather, I thought it was time to start investigating the lofty lounges around the city. New York is really starting to make the most of rooftops, with bars and bees being the foremost tenants. ( The Whitney has beehives on their roof but more of that later… )

The Ganesvoort in the Meatpacking district has been a popular spot for ages, with a prime vantage point above the ever busy Pastis Restaurant and the cool member’s-only club / hotel next door, Soho House. It’s perfect for people watching and ordering a second bottle of champagne on a hot summer’s night. Up in East midtown the Ganesvoort’s sister hotel recently opened without a view to compare, but instead with a pool to remember….

By absolute contrast, and if you thought the seventies were over, go to the rooftop of 230 Fifth Avenue, and you will find that as far as rooftops bars are concerned, there is something for everyone. Velour red coats are provided for the cooler days in an atmosphere of pure chintz – mirrors, light spangled animals and a touch of disco. But the view! Spectacular! It’s probably the best aspect of the Empire State in the whole city. So call in on your way home from Macys for a fluffy duck and you won’t be disappointed. 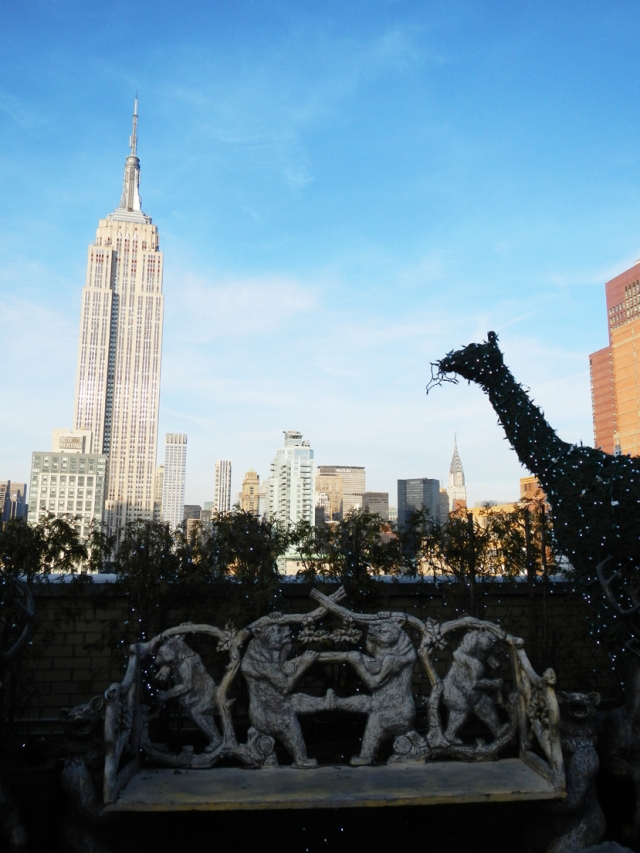 Over on the west side a new Kimpton Hotel, Ink48, has a rooftop bar called ‘Press’ with spectacular views up the Hudson river towards the George Washington Bridge, as well as over Hells Kitchen to Times Square. Even though you’re only on the 16th floor, it feels much higher because of the sweep of real estate rising up in the distance. Apart from the view, that part of town around 11th Avenue and 47th street always feels a bit isolated to me. Maybe things will change with hotels like this springing up, but for now there are only a few car showrooms and various ‘gentleman’s clubs, and I wasn’t too sure about leaving my bike on the street. ( I also discovered the ‘stable’ where horses from the Central Park Carriage Rides live, solving a mystery I should have known long ago – dreadful – I will have to get the Raging Grannies on to this…! ) But regardless, it’s worth seeking out the location just for the view, and maybe having a tipple or two.

Back at the Library Hotel, the terrace is small and intimate by comparison. You feel you are not so much looking at the city but being part of it. It will be a perfect place for the wedding party… 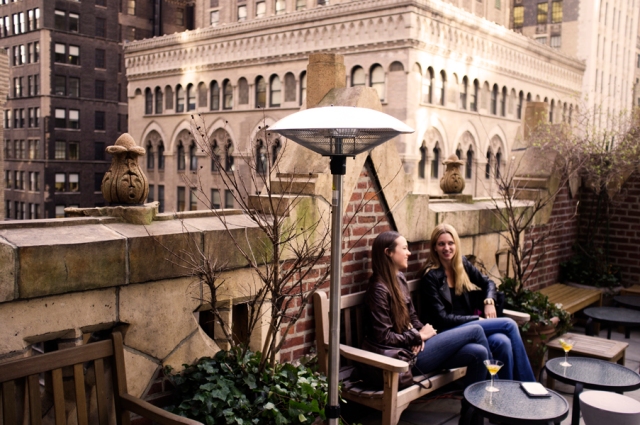