Posted on September 13, 2012 by TheFitzyreport

While there is no sign of Marlon Brando, there is plenty of action these days on the waterfront to the east of Manhattan. Much of this stretch was left to decay after being a historical hive of activity for industry and shipping. The Pepsi Cola sign remains as a retro reminder of the past, along with the Domino sugar plant and empty warehouses all the way from Long Island City to the Brooklyn Bridge. Lack of public transport and industrial toxic residue has been a deterrent to development, but times have changed. Now there is a splurge of new buildings mushrooming on the waterfront, the shore is being developed for recreation, and the east river boasts a fast and efficient ferry service that zigzags all the way from East 35th Street down to Wall Street. I’ve taken the ferry a couple of times for the scenic route downtown, or to go to the Williamsburg weekend food markets, but on Sunday Sean & I crossed the river to Long Island City and found a lot more than just the filming opportunity we expected.

The Hunter’s Point ferry stop is actually still a construction site. On landing you weave through a fenced-in pathway that eventually takes you through a carpark and then around past an authentic looking Crab House to the newly renovated space. Apartment blocks and icecreameries are sprouting up in front of the renovated barge landing, and new piers are attracting people, puppies and parties, all with an amazing view back to Manhattan. In the midst of this gentrification – and the yoga class appearing to be in adoration of the Empire State, there was one pier reserved for exclusively for fishing, and that’s where all the action was….

Jack Ruffino, regular winner of the Brooklyn Fishing Derby ( last year with a 40 pound striped bass caught from the pier ) was on hand to show us his famous run-and-cast motion. While the line flew in the direction of the Chrysler, he talked about life on the waterfront, exchanging the ‘tripwires’ that could – and did – take him to jail, for the fishing lines that gave him an angler’s patience and put him in the company of bait-running Jane. He also picked up an Alien tattoo along the way of the famous girlfriend of H. R. Giger. What an interesting character! John talked with great admiration about Steve Irwin and the rugged wilderness of Australia – the whole conversation seemed strange with the city skyline right there in front of us…

Two days later Sean and I were back on the ferry – with our bikes – heading southbound to Brooklyn to get ringside viewing of the September 11 beams of light. It was a spectacular evening and the jostling of tripods continued well beyond darkness. By then Sean and I decided that it was time for home, so wound our way onto the Brooklyn Bridge and rode home via Little Italy, where preparations for the feast of San Gennaro were well underway. That will be next week’s adventure, but for now, put the east side waterfront on your list, it’s a ride you can’t refuse…. 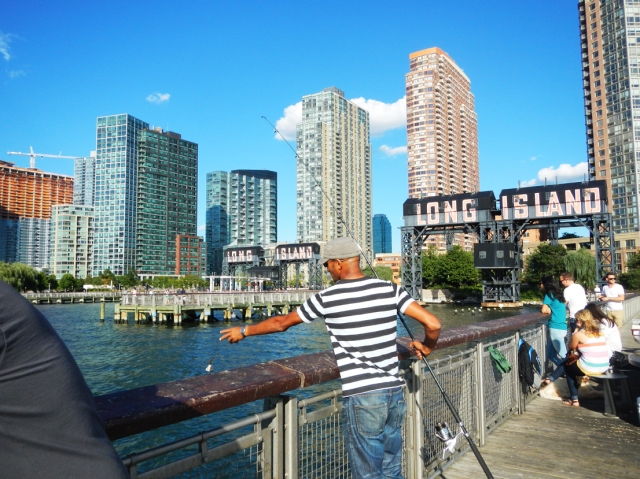 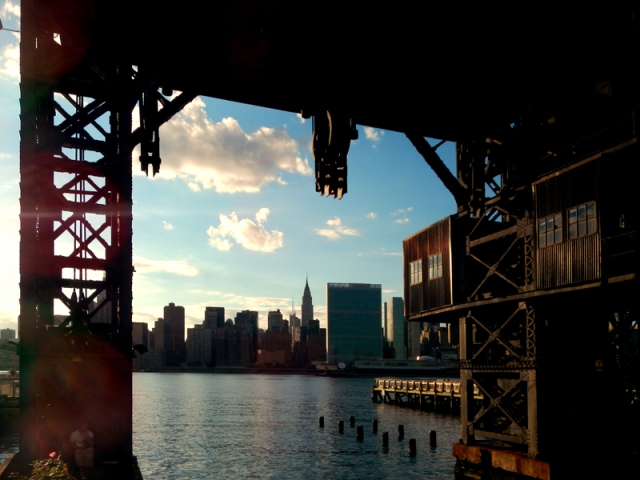 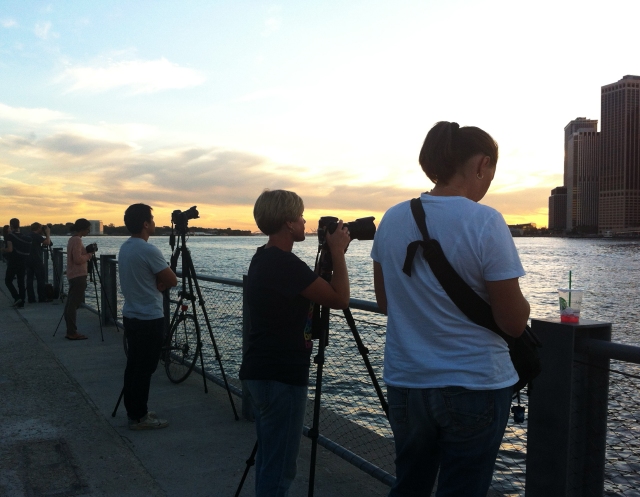 This entry was posted in Fun, travel. Bookmark the permalink.