Posted on February 16, 2014 by TheFitzyreport

The exquisite exhibition celebrating children’s literature at the New York Public Library is the cause of many excited cries from the young and the older lovers of classic tales. Curated with the joy of storytelling itself, the exhibition displays not only books, but original illustrations, actual manuscripts and the inspiration behind many of our favorite characters. The Wild Things, Pooh Bear and all the gorgeous irreverence of Dr Zeuss take center stage. There is the wooden doll which served as a model for Mary Poppins ( although perhaps not for Julie Andrews! ), the original manuscript from The Secret Garden, illustrations from The Wizard of Oz and the drawings of Little Toot, as watercolorist Hardie Gramatky doodled and daydreamed in his studio looking out over the East River.

The stories behind the stories are always the best, like discovering that The Wonderful Wizard of Oz grew out of a father’s desire to distract and entertain his children ( which took him from a door-to-door salesman to a Broadway legend ), or that Frances Hodgson Burnett wanted more happiness in the world, so wrote A Secret Garden as a premise for hope – ‘When you have a garden, you have a future’….

One of the most loved residents of the Library, Winnie the Pooh – the original Pooh Bear and a present from the author’s publisher to the library, was on display with Eeyore and Piglet. In the midst of the much loved toys was a photograph of A. A. Milne with his son, the boy that inspired Christopher Robin. A woman stood in front of the cabinet in misty disbelief that she was looking at the real thing. Perhaps her father – like mine – had made up magical stories for her that were better than any others, they were the gift of imagination, and she still believed that ‘in that enchanted place on the top of the forest a little boy and his bear will always be playing…’ 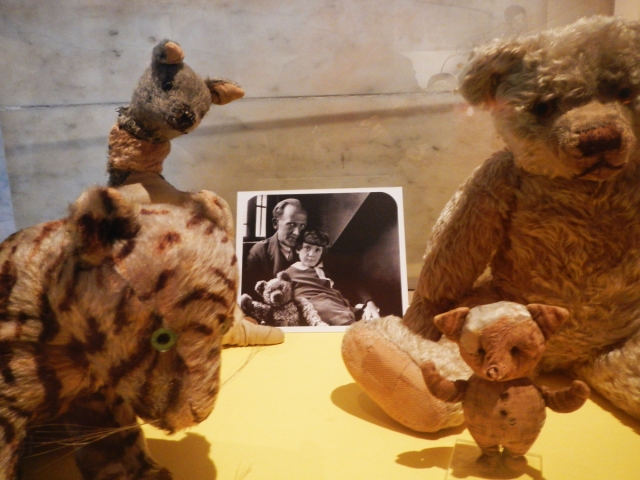 This entry was posted in art & inspiration, Uncategorized and tagged NYPL, Why Children's Books Matter. Bookmark the permalink.

8 Responses to Why Children’s Books Matter