Posted on January 24, 2012 by TheFitzyreport

Where else but the New York Public Library would you find such an interesting political discussion as we recently enjoyed between Oliver Stone and Tariq Ali…? The conversation was part of a program at the NYPL with a mission ‘to provoke, engage, enlighten, instigate, and agitate the mind’. They certainly succeeded! Oliver Stone’s politics was well known to us through his films like ‘Wall Street’, ‘Platoon’ and ‘JFK’, and when Tarik Ali opened their discussion by saying he was in North Vietnam with Bertrand Russell and John Paul Sartre as observers in the 60’s at the same time that Stone was in South Vietnam engaging in combat, I knew we would find common ground.

After all the hoop la and ‘holier than thou’ rhetoric with the run up to the Republican nomination, not to mention the disillusionment in the hope that was Obama, it was very refreshing to hear two intellectuals talk candidly about the state of American politics and the world. Both had amazing memories for detail, and discussed the impact on the present of forgotten, or deliberately buried episodes of history. I madly made mental notes, especially of the books they mentioned and on top of my reading list is now ‘ JFK and the unspeakable: Why he died and why it matters’.  They talked about oil and war, about Italy and Greece putting the running of their countries in the hands of big banks, and about Bush having to plan his overseas trips with caution so the ICC does not get to detain him for war crimes.

Coming away I was sparking with the inspiration of hearing such studied, impassioned conversation. Despite the hard core reality of their comments, I somehow felt optimistic and empowered. No doubt about it, education is forever ongoing and libraries are the perfect place to foster it. And you can always pick up a good book on the way out…. 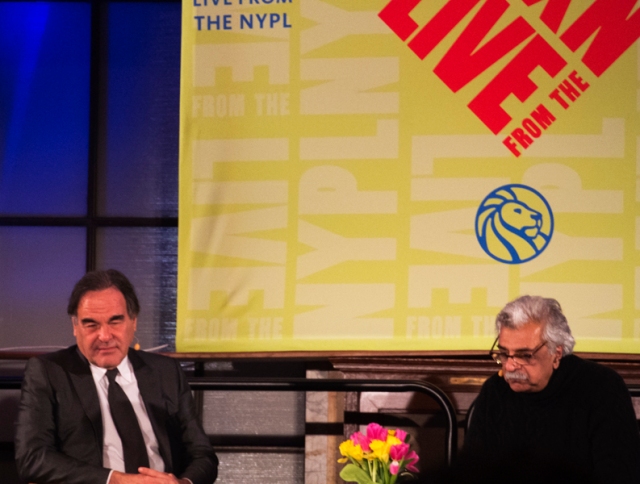 This entry was posted in events and tagged NYPL, Oliver Stone, Tariq Ali. Bookmark the permalink.

1 Response to Politics and public libraries