Hitchcock would think it a scream. On top of the MET this summer, artist Cornelia Parker has recreated the Bates Motel out of a hundred year old barn from Connecticut. On a stormy morning the vision of the familiar horror house, juxtaposed against the New York skyline, needed only the creak of a rocking chair to remember ‘mother’. Fortunately there was no chair, and the house was as much a movie set as the original. But as Parker is known more for blowing things up and exhibiting the remaining fragments, we were lucky to get half a house in one piece.

In the chain of artistic inspiration, Parker’s previous exhibition of the exploded garden shed inspired an orchestral composition by a South Korean violinist. For this commission, PsychoBarn, she was inspired by Hitchcock, and he was inspired by the Edward Hopper painting ‘House by the Railroad’. Hopper’s painting coincidentally resides at the MET, and while I didn’t see it this visit, a stunning collection of antiquities from the Hellenistic Kingdoms did raise other questions. In the second century BC, who was their inspiration…?! 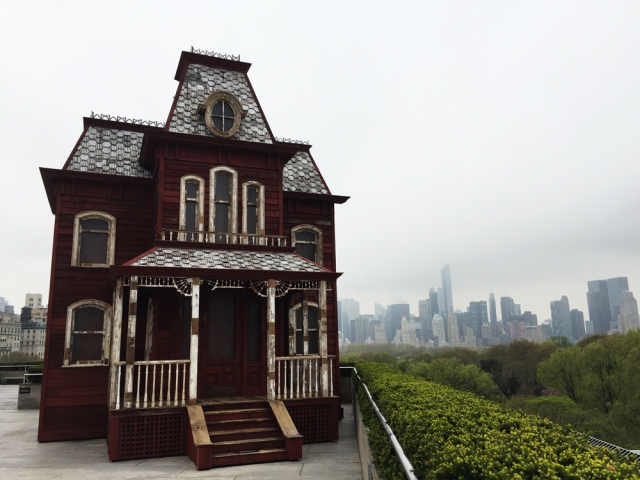 This entry was posted in art & inspiration, events, gardens, the view from here, Uncategorized and tagged haunted house NYC, Hitchcock at the MET, MET NYC, PsychoBarn. Bookmark the permalink.